Kelechi Iheanacho will not go missing for six weeks of next season after Nigeria were knocked out of the Africa Cup of Nations.

The 19-year-old Manchester City striker was left on the bench as Nigeria lost 1-0 to Egypt on Tuesday to fail to make the finals for the third time in four tournaments.

But that is good news for the Blues, meaning that Iheanacho, tipped to play a bigger part under Pep Guardiola, will not be leaving the club to play in the tournament, which runs from early January to February.

Iheanacho made his first start for the Super Eagles last week, in the first group game against Egypt, and claimed an assist in a 1-1 draw.

He won his first full cap in November as a substitute against Swaziland, but has now scored nine goals in seven starts and 19 sub appearances for the Blues.

Yaya Toure has been involved in the competition three times during his City career, causing managers headaches at a crucial phase of the season.

His future is up in the air with doubt over his club future, and uncertainty over whether he will make a return to international football. 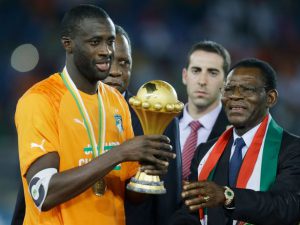 The 32-year-old took a break from playing for Ivory Coast after their triumph in last year’s competition, but was originally included in the squad for the qualifiers in this international break.

He pulled out, saying he needed time to recover fully from a troublesome heel injury.

But Ivory Coast are top of their group and on schedule to reach the finals, to be held in Gabon.