Without question, Nigeria is one of Africa’s biggest and most successful football nations.

As three-time African champions, the first African nation to win football gold at the Olympic Games and the most successful country at the Fifa U-17 World Cup with five titles, Nigeria have trophies to back up the claim.

Throw in their seven titles at the African Women championship and same number of titles in the U-20 African Youth Championship, and you get the picture of a nation that has consistently been in the top tier of African football.

But Nigeria have been on a downward spiral in the past two years and their failure to qualify for the 2017 Africa Cup of Nations is a confirmation of decline.

The Super Eagles will sit out the finals in Gabon as they did in Equatorial Guinea last year after winning the 2013 edition in South Africa.

It was only three years ago that Stephen Keshi led the team to the Nations Cup title and he also steered them to the last-16 at the 2014 World Cup in Brazil.

Nigeria’s fall since then has been rapid and the tragic comedy that it has become speaks volumes about the state of the game in the country.

Football in Africa’s most populous nation has been plagued by the Nigerian Football Federation’s failings; a bitter leadership crisis, in-fighting over the presidency, instability in the coaching role and political and financial problems.

Former international winger Segun Odegbami, a key member part of Nigeria’s team that claimed the country’s first Nations Cup title in 1980, believes success on the pitch will not return unless they “sort things at the administrative level”.

“It is inexcusable that the great Super Eagles will not be at the biggest tournament in Africa twice in a row,” Odegbami told BBC Sport.

“I don’t think that we’ve had the kind of administration that would have shepherded football development so that we can fulfil our true potential.

“We’ve not had the best quality in the last two football administrations with all the controversies and in-fighting. Clearly nothing good comes out of that kind of situation, but sadly it’s a reflection of the state of our football.” 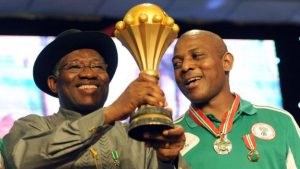 Odegbami insists there needs to be consistency in the coaching department, but warns that only competent administrators can stop the Nigerian game from drowning in mediocrity.

“Until the foundation is strengthened and properly reinforced everything that you build on it will collapse the way it has this time around,” he said.

“Yes it [poor results on the pitch] has everything to do with the way the coaches have been shuffled like musical game of chairs.

“These are all journeymen. The top coaches will not come to Nigeria – they will just come, milk the country, live in Europe, collect big money and will not do anything.

“We are in a big mess created by the NFF board and I don’t know how we are going to come out of this with the 2018 World Cup coming soon. It’s a failure on the part of the administrators.

“Unfortunately we are no longer one of Africa’s football powerhouses. If we do not qualify for the Nations Cup two times in a row, how do you call yourself a giant?”

The former Inter Milan, AC Milan and Derby County defender feels the NFF has seemed intent on destroying the reputation of Nigerian football, along with their own.

“Those managing football have disrespected our coaches and players,” Taribo told BBC Sport.

“Look at how dedicated heroes like Siasia, Keshi and Oliseh were treated by the administrators – they were unpaid and abused by those in power.

“The problems we are facing now started a long time ago and the slide will continue with these sets of politicians and self-serving people in charge of our football.

“Where’s the structure for development in our football? The only thing we hear daily are those fighting for power and control of the game.

“They lack the technical ability to reshape the country’s football and that is the sad truth.”

The amount of dissenting voices suggests something drastic needs to be done to change Nigerian football.

NFF president Amaju Pinnick says he wants quickly to move on by shifting focus to the 2018 World Cup, while at the same time insisting his administration does not suffer from poor organisation, bad management nor administrative deficiencies.

Since taking charge of the NFF in September 2014, Pinnick has reiterated his desire to change the way Nigerian football is run.

But he has yet to deliver on good intentions and it is time for promises to be delivered.

For Nigerian football to move forward, it must find a way to forge an environment that looks after its players, coaches, develop football from the grassroots and has transparent and fair administration.