Children of members of the Islamic Movement in Nigeria campaign for the release of their leader Sheikh Zakzaky in Kaduna, Nigeria, March 14. Zakzaky has been in detention for more than three months, and his followers say he is being denied legal assistance.

Three months have passed since the leader of millions of Nigerian Shiite Muslims was dragged away from his followers after a bloody battle with soldiers.

Sheikh Ibrahim Zakzaky, the leader of the Iranian-backed Islamic Movement in Nigeria, was arrested over the course of a few fateful days in Zaria, in northern Nigeria, when hundreds of his followers were killed in clashes with the Nigerian military. To the military, Zakzaky is a dangerous preacher and a threat to the integrity and unity of Nigeria. To his followers, he is a spiritual and political leader to whom they swear allegiance above all others.

Rumoured to have been shot six times during the clash, Zakzaky has been unreachable since January. He is currently believed to be in the custody of Nigeria’s intelligence agency, the State Security Service (DSS). “He’s held incommunicado so we cannot say whether he is recovering or what his status is now,” says Ibrahim Musa, the IMN’s media spokesman.

Zakzaky is just one of hundreds of IMN members to have gone off the radar since the events of December 12-14, 2015. At least 300 members of the country’s main Shiite movement were killed in violent clashes with Nigerian soldiers, according to Human Rights Watch (HRW). HRW’s report alleged that the military dumped bodies in mass graves, making a definitive death toll difficult to ascertain. Gruesome images and footage emerged online purporting to back up these claims, including photos of a bloodstained Zakzaky (the IMN claims he was shot at least six times during the clashes). According to the Nigerian army, the clashes were the result of a failed assassination attempt on the Chief of Army Staff ordered by Zakzaky; according to the IMN, they were unprovoked attacks by armed soldiers on unarmed worshippers.

Musa says that 750 people remain missing after the clashes. “Out of this many [missing] people, how many are dead or alive, we cannot say, because since what happened in December to date, no single corpse has been handed over to us so that we can give it the proper burial service,” says Musa. A further 191 IMN members are currently being held at Kaduna’s central prison in northern Nigeria, from where they will stand trial on March 29, charged with illegal possession of firearms and causing a public disturbance. The trial, combined with the continued absence of its spiritual leader, is likely to incite further anger among a movement that Nigerian President Muhammadu Buhari has accused of trying to create “a state within a state.” 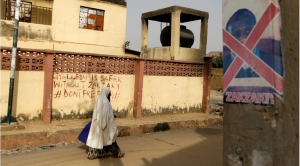 A woman walks past anti-Zakzaky graffiti in Zaria.

A woman walks past anti-Zakzaky graffiti in the Gyallesu district of Zaria, Nigeria, February 3. The clashes between Zakzaky’s movement and the army have stoked tensions in northern Nigeria.

The Kaduna state government has launched a commission of inquiry into the events that took place in Zaria and Nigeria’s defense headquarters recently established a human rights committee to investigate all allegations of violations against the military. Army spokesman Colonel Sani Usman previously told Newsweek that soldiers “followed all necessary procedures” during the incident and that the military was not and would never target “Shiites or any ethnic or religious group.” Brigadier-General Rabe Abubakar, Nigeria’s defense spokesman, told Newsweek it would not be appropriate to comment on Zakzaky’s detention or the forthcoming trial before the Kaduna inquiry was complete, but did say that the military had submitted itself to investigation since “we have nothing to hide.”

Zakzaky trained in Iran and began propagating Shiite Islam in Nigeria around the time of the 1979 Iranian revolution, which saw the overthrow of the monarchy and its replacement with an Islamic republic. He spent nine years in prison during the 1980s and 1990s on charges of civil disobedience brought by successive military regimes in Nigeria. While Shiites make up a small minority of Nigeria’s Muslim population—estimated at 76 million or just under half of the total population—Zakzaky’s IMN has been on the rise since the 1980s, according to Atta Athanasius Barkindo, a PhD candidate at SOAS University, London who works with rehabilitating violent extremists in Nigeria. Barkindo says that the movement is dominant in Zaria, where it has its own army and education system and where it fails to recognize symbols of national identity, such as the Nigerian flag—adding weight to Buhari’s “state within a state” comments.

According to Musa, Zakzaky’s movement numbers anything between five million or 25 million members, all of whom are committed to establishing an Islamic system of governance in Nigeria. (HRW put the figure at a more modest three million.)  ”[Zakzaky] is really radical when it comes to implementing Shariah,” says Marc-Antoine Perouse de Montclos, associate fellow at Chatham House, who has met Zakzaky several times in the past. “He’s got the same kind of rhetoric as Mohammed Yusuf from Boko Haram, whereby Shariah is the law of God and cannot be implemented properly under a constitution written by the hands of man.”

Parallels between Zakzaky’s situation and that of Yusuf have been raised before. The Boko Haram founder was also arrested following violent clashes between his Islamist movement and the state security apparatus—this time in Maiduguri, Borno state, in 2009. But, his detention followed a different path—Yusuf was killed in custody after the police claimed he tried to escape. His death pushed Boko Haram underground and into a more violent radicalism, which has seen the militant group claim tens of thousands of lives in northern Nigeria over the past six years. After the Zaria clashes, none less than Muhammad Sa’ad Abubakar III, the 20th Sultan of Sokoto—traditionally viewed as the highest seat of Islamic authority in Nigeria— warned that the violence of the military towards the Zakzaky’s group bore a striking resemblance to the circumstances surrounding the outbreak of that militant insurgency, which must “not be allowed to repeat itself.” 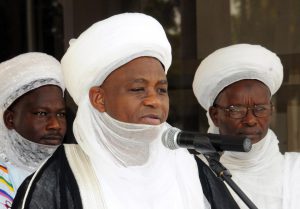 The Sultan of Sokoto speaks in Abuja.

The Sultan of Sokoto Muhammad Sa’ad Abubakar III (C), pictured addressing the media in Abuja on December 27, 2011, has warned the military to deal with Zakzaky’s situation sensitively or risk radicalizing his followers.

The key difference between Zakzaky and Yusuf is that the former has never advocated armed struggle as a means to achieve the establishment of Islamic rule in Nigeria, according to Perouse de Montclos. What is concerning, he says, is the lack of accountability for the Zaria clashes among the military. According to Perouse de Montclos, not one military officer has been disciplined so far as a result of the clashes. “Zakzaky [and the Zaria clashes], for me, was the first big political mistake of Buhari’s administration where he shows that he does not control the army,” he says.

Zakzaky’s movement has distanced itself from reports that it is planning a violent retaliation to the Zaria clashes. “For over 40 years, we have not been engaged in any violent acts. Whenever you hear of a clash between this movement and the security forces, it is the security forces who always come and attack us,” says Musa. Indeed, the December incident was not the first time the IMN has come into conflict with the Nigerian state: some 34 people were killed—including three of Zakzaky’s sons—when the movement clashed with military personnel during a July 2014 pro-Palestinian march in Zaria. But would the group’s espoused stance of nonviolence change should Zakzaky die in detention, as Yusuf did? “I cannot say this is what we will do,” says Musa. “I don’t like to think that it will reach that point, inshallah.”