Spread across a tree-covered alcove in southern Nigeria is the Afi Mountain Wildlife Sanctuary, a 38-square mile patch of dense rainforest that is one of the last refuges for the one of the world’s rarest primates: the drill monkey. Conservation groups estimate there are between three and eight thousand drills left in the wild, but the animals face an uphill battle.

In Nigeria, where as much as 95% of rainforest has already been destroyed, the drill monkey was thought to be extinct thirty years ago.

“There had been no studies of drills,” says American conservationist Peter Jenkins, who arrived in Nigeria as a tourist in 1988. “Nobody really knew where they were still existing.” 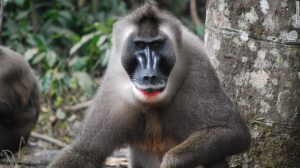 Fully-grown male drills are known for the deep purple hue in their cheeks.

Jenkins, who conducted survey work to find out where drill monkeys were still living, claims that illegal logging, farming and poaching were all direct threats impinging on the primate population.

Seeing the dangers the drill monkey faced, Jenkins and wife Liza Gadsby created Pandrillus, an organization designed to protect the rare primates. They built the “Drill Ranch,” a rehabilitation and breeding center within the Afi Mountain Sanctuary, to help primates orphaned by hunting in the area or others illegally held by locals.

Inside one of the oldest primary rainforests in Africa

A 22-acre enclosure provides a safe space for the primates, where they are both cared for and studied.

“The drills are probably the most interesting of primates because there’s always something going on. It’s a complex society,” Jenkins argues. 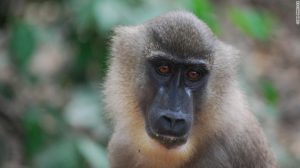 Female drill monkeys are only a fraction of the size of their bulkier male coutnerparts.

Males can weigh up to 100 pounds and can be as much as three times the size of females who, whilst subjected by the alpha male, also function as kingmakers.

The alpha male’s job is to decide where the group looks for food and where they sleep, whilst protecting them from outside threats. Challengers to the title of alpha male will often sharpen their teeth for up to two weeks before slugging it out, but the winner must also be accepted by females, who are also led by a dominant individual. It is the ladies who decide which male will best protect them.

Quagga were extinct for 100 years. Now they’re back 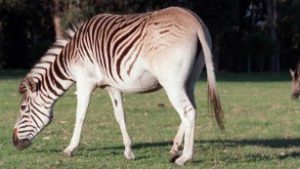 “It’s a non-stop soap opera of a drama, of comedy, at times it’s a thriller,” says Jenkins. “There’s so much going on, the dynamics are so dynamite in a drill group.”

Jenkins hopes to eventually release the drills into the wider Afi Mountain Sanctuary, but admits that wider change needs to take place in order to sustain the species.

“You see conflicts all around Nigeria,” he says. “It’s fights over land, it’s over resources: water, land, farming. And so it’s an acute problem now here… There’s heavy encroachment in other reserves and heavy encroachment within the national park.

“The (drill) population will come back if the protection becomes effective, but they won’t come back if there’s no habitat. If they’ve got no place to live it’s a no-hoper for these animals.”