Oil revenue accounts for roughly two-thirds of the government’s funding.

President Muhammadu Buhari has promised to crack down on corruption since coming to office last May.

In a statement, the Revenue Mobilization Allocation and Fiscal Commission (RMAFC), an independent body, said: “Records at the Commission’s disposal indicate that between January 2011 and December 2015, the total indebtedness of NNPC to the Federation Account was 4.9 trillion naira.”

Under the current set-up, the NNPC hands over its oil revenue and money is then paid back based on a budget approved by parliament. 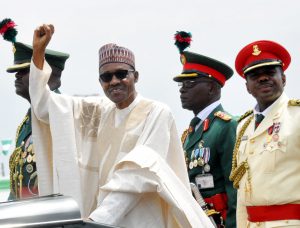 In this 29 May 2015 photo, Nigerian President, Muhammadu Buhari, salutes his supporters during his inauguration in Abuja, NigeriaImage copyrightAP

The state oil giant has been mired in corruption allegations and losing money for many years.

Last month, the government announced that the NNPC would be broken up into seven different companies.

A separate audit ordered under former President Goodluck Jonathan and carried out by global accountancy firm PwC, found that the NNPC had failed to pay the government $1.48bn between January 2012 and July 2013.

Nigeria is Africa’s biggest oil producer, but the economy has suffered because of the recent decline in the price of oil.